Morning! Has it really been only a week? It feels sooo much longer, but that is what being sick does to you. I have a cold, so can’t go around mum for a few days. Plodding along at work. Seriously disappointed in this last season of Thrones. Really enjoyed binge watching the ITV series, The Bay, with Louise. Cleaning thru 40+ years of stuff the MIL has kept (business records from 1984, anyone?). Telling Mase what is happening with Grandma, then having a stroppy child as his aunt told him I’m exaggerating. What? Not helpful. And this is why she’s not the testamentary guardian, Lou is.

Last week’s #magicalstitches challenge was completed on Sunday, my time. It was hard to get thru Raven Queen, much easier on Fairy Idyll (32ct linen vs 28ct Lugana), & then I used Fairy Idyll for the pop-up challenge, so there’s 400 stitches in her, not 350.

This week’s challenge has gone in my “too hard” basket so I am stitching the penalty – 400 stitches on a WIP of my choice. I’ve gone super-simple, and chosen my friend Jenny (home*stitch*ness on Etsy, FB, IG and featured in multiple World of Cross Stitching magazines) & her Four Seasons in New Zealand. There are companion pieces for the UK, Australia, Canada & the States. Super cute. Progress shots next week!

Hello everyone! My resolve for May is to be not as inwardly focussed, so you should see a bit more of me. These last few months have been emotionally heavy, and with the MIL now having a hospice referral, it’s going to get a lot worse before healing starts. I still haven’t quite worked out how to present my WIP Wednesday, as my stitchy focus is #magicalstitches which runs Monday to Sunday, but we’ll see what happens. 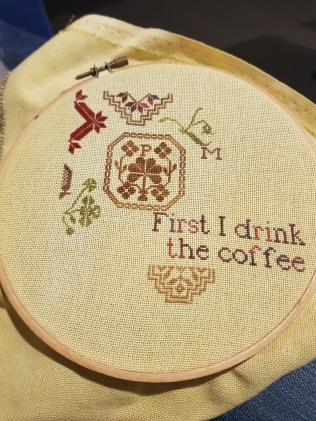 My “one a day” piece for April has been Coffee Quaker. Five motifs are now complete and I could be as much as 1/6th thru. No rush on this one anyway. Plus it’s over one.

Last week there were two challenges in #magicalstitches. One was “select a part” & for myself, rather than visit ten stores in Hogsmeade and do 100 stitches/short story on what I “brought”, I chose to visit one shop. I’m focusing on the huge boring-ish blocks of colour in Shakespeare’s Fairies, as it’s harder to go off track while life distracts me. I made up some story that I was poor, as my Muggle parents were intimidated at Gringots and asked for 10 knuts instead of galleons, and put in 1022 stitches in at Gladrags Wizardwear.

There was also a Full Moon pop-up (for Remus Lupin). 30 stitches on dark (side of the moon), 30 on light (the side we see) and 30 on animal. I ended up doing 143 overall (instead of leaving threads hanging) on the Cloudsfactory We’re All Mad Here biscornu. That cat is creepy.

This week I’m stitching the nominated option, no penalty stitches. 300 on a tree/plant for the Whomping Willow, and 300 on a building for the Secret Room. I’m done already there with a start to the conifer in Fairy Idyll, and working on the column/balustrade for Raven Queen.

Wow – July’s full moon has been beautiful. I’ve seen quite a bit, as I drive in the dark to the base pool.

I have got thru 3 rotations of stitching this month; a chunk of Persephone, over the mental hump of Afternoon in London and up to Maleficent in Raven Queen’s first page. Just quietly, I’m impressed I stayed disciplined enough to stick to those 3 at home. 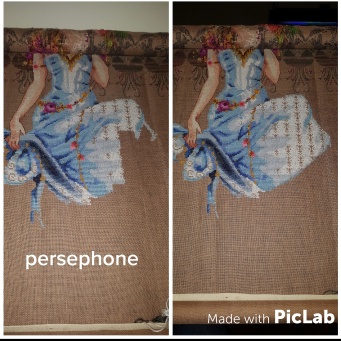 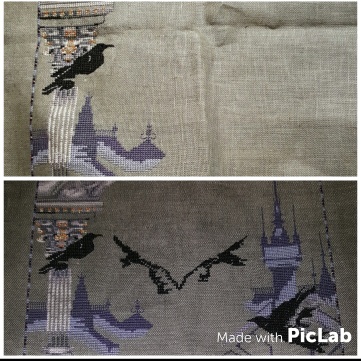 Now I missed the June check-in – Topic:  Do you find yourself more productive with stitching in summer or winter? I am finding I am about the same this year, altho we’re really early into Winter down here. Making the commitment to record my projects and using Instagram has stopped a lot of my usual hibernation.

That’s nine finishes, and none will take much to FFO really apart from sending the cherub out to the framers. I’m OK with not having a big design finished in 2016, altho I do suspect I will finish Mermaids of the Deep Blue. And if all goes to plan this week, I will finish stitching the 4th of the Mill Hill ornaments and bead all four before next Friday.

So I screwed myself over when I said I’d possibly have a finish by now. The whole family has had one bug after another (I’m hoping that B’s vomiting last night is due to something he and he alone ate!) and I didn’t pick this up for three days. Still hoping to have a finish by next Wed, the Smalls check in date. 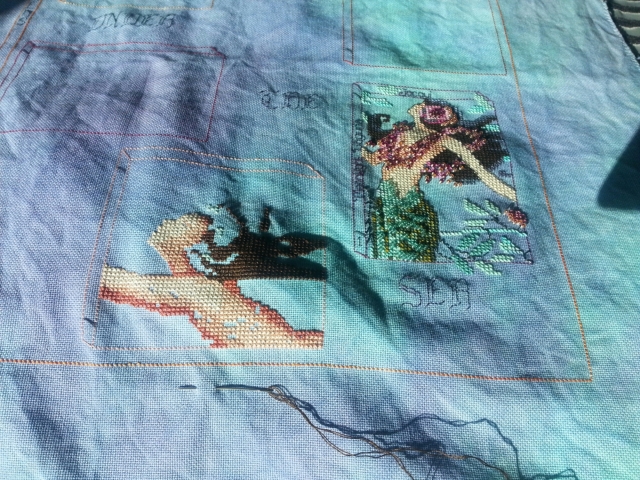 I also fell in love with the new Mira release, the Raven Queen. She’s on order now.

I did Mase’s reading with him last night (he usually does this with Grandma). He’s reading early chapter & nonfiction already! 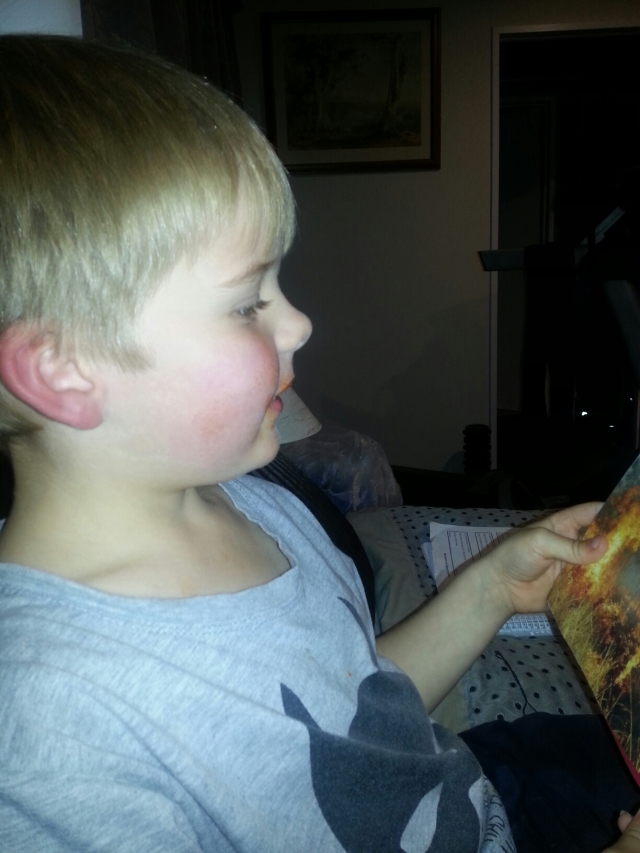