well here we are! I missed last week so I have a wee bit to show.

We celebrated Queen Elizabeth’s birthday this past weekend, so there was an extra day away from the desk. Si has gone to Ohakea on Thursday at oh-dark-oclock as he refereed at an inter-base league tournament. He also came home at an equally it’s-dark-everywhere hour on Monday morning. This idiot had driven him too/fro from the base, so I had to get up reaaaaaaaaaaaaaaaal early to pick him up. But it was worth it to have him home 12 hours earlier than expected.

With no senior footy, B only had the one game to referee so we had a family quiet weekend planned. The bigger boys studied and played the weekend away, Mase whined. And whined. Then on Monday night he crashed big time. Turns out he had a virus. Someone will turn up and yank away my mother card soon. He’s on the mend now, but has binged watched an awful lot of Netflix.

I finished stitching & beading the Mill Hill fireflies kit (and beaded the back a couple of times, doh), and also stitched up a little piece from the JCS Christmas 2014 issue, but on plastic canvas and not quite as designed. I plan to string this up on a cream ribbon and set it into a frame. 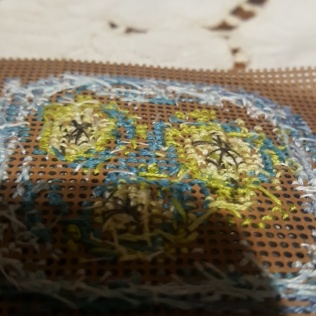 I also put Persephone away for a wee while. I was losing heart with that skirt; so as much as I do love the colours that I’ve converted her to, it was time. My StitchMAYnia goal wasn’t the traditional 15 starts but to stitch every day in May, and I very nearly got there. Persephone alone was stitched 23 days of the month & on 3 days she wasn’t touched, I stitched a Small. I’m pretty happy with that.

On Sunday night I pulled out Mermaids again. I’m nearly at the half-way mark of the chart (one more colour to go) so here’s what they look like, as of 5.30am today:

I also popped up on Instagram my version of parking. Most of the multi-page charts I have used have a greyed-out section, usually the bottom two lines of the chart. I simply DON’T stitch the top leg of the last cross, and then on the next page, I draw a box around the incomplete stitch. I don’t pretend to be an expert at parking, and this probably won’t work for everyone, so no offence if this doesn’t work for you.

dispatches from the Greater Toronto Bioregion