February 4 – Topic: How do you overcome that feeling that you’re in a rut with a particular project?

In all honesty, I don’t do rut treatments very well. In the past, they’ve just gone into the UFO pile (altho there is actually only four pieces in that pile). I tend to fad about a piece and LOVE IT SOOO MUCH that it has to be finished, right then & there. Mostly, my 2014 choices reflect that. I got a heap of stuff completed & only left two major starts unfinished. One, because it’s my “hospital” piece – Mirabilia’s Mediterranean Mermaid – & I only work on it when Mase is hospitalised. The other – for some reason I got discouraged with Stargazer. I think it’s her hands – they look so awkward.

However, for all that gloating, I didn’t touch Teresa Wentzler’s Tapestry Cat. At All. Not even to get it out of the storage container it lives in. I think it must be the perceived difficulty & fiddly bits – I love the image and the colours and the work I’ve done so far. I know that if I just pull it out, and start stitching, I’ll fall back in love with it – after all, that’s worked with Stargazer. She languished for about four months until I packed her, and only her, as my “entertainment” for our family holiday early in January. Since then, I’ve worked almost exclusively on her. I guess forcing myself on something makes me appreciate it. Like doing the dishes – a clean kitchen is a beautiful thing. Or laundry – folded piles & clothes on hangers almost make it worth the repetition.

Anyway. Regular blog readers (hey!!) have seen a few other things & today I have two more to share. First is Blackbird Designs freebie Souvenir de France. I had planned to stitch this for Si’s birthday (whenever he sees a shot of the Tower he comments “been there”. It’s very annoying sometimes) but now it’s intended for someone else. I need to finish it this weekend – this is at about 6 hours stitching so even with variegated thread (one stitch at a time) it’s a quick stitch. 25ct natural Lugana & DMC 99, in case you care. I’m thinking of maybe washing it in cold tea to age it a little – what do you think? Link to get the chart is here: http://blackbird-designs.blogspot.co.nz/2009/05/souvenir-de-france.html

Second is about three hours of lettering – I am not in love with lettering at the best of times – of the Joan Elliot SAL (26ct cream Linen, lettering changed to DMC 311 as black looks too harsh). I also need to have this done over the weekend. Then I need to suss something out for Si. Perhaps something English? Help! 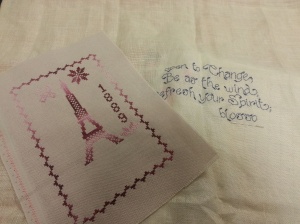