As the awkward one, Courtney Watson may not be as together as her sisters, but she excels at one thing—keeping secrets, including her white-hot affair with a sexy music producer. Planning Mom’s wedding exposes her startling hidden life, changing her family’s view of her—and how she views herself—forever.

When Sienna’s boyfriend proposes—in front of her mom and sisters, for crying out loud—he takes her by surprise. She already has two broken engagements under her belt. Should she say “I do” even if she’s not sure she does?

Rachel thought love would last forever…right up until her divorce. As Mom’s wedding day draws near and her ex begs for a second chance, she’s forced to acknowledge some uncomfortable truths about why her marriage failed, and decide if she’ll let pride stand in the way of her own happily ever after.

This book links into Mallery’s Mischief Bay series (see here for my reviews  ) which I loved. This title is one I’d solidly rate 4 stars also; it ticked nearly every box. I would put myself in the Rachel camp, so I’ve learnt something from this book – it is okay not to expect the same effort in bathroom hygiene from my boys as I would put in, but it’s definitely okay to give them a checklist for guidance!

IRL, I have not lost more weight altho I have stayed static for the last two weeks. I can however slide my jeans off without undoing them and I need new bras. This is progress! Simon’s torn some cartilage in his knee, and is on a wait for surgery. Understandably, he’s in discomfort most of the time and outright pain at other times. Yesterday I picked up a brace – and we both slept solidly. 7 hours or so my Polar tells me! Apart from the night he fell asleep on the couch, I haven’t had more than five to five-and-a-half hours for a few weeks. I’m hoping this is the start of a beautiful friendship. It’s very hard to get up at 5am and go swimming without restful sleep!

I didn’t stitch for a couple of weeks, but then I binged a little over the last weekend and finished Afternoon in London! It’s currently on my noticeboard here at work, as I need to make time and go to the framers in Mt Eden. I’ve started the Harry Potter House Banners for Z, and it’s BORING. Seriously boring. It’s going to be a Netflix binge watch to get thru these things. I have also joined up a large format (5K stitches) round robin – what was I thinking?! 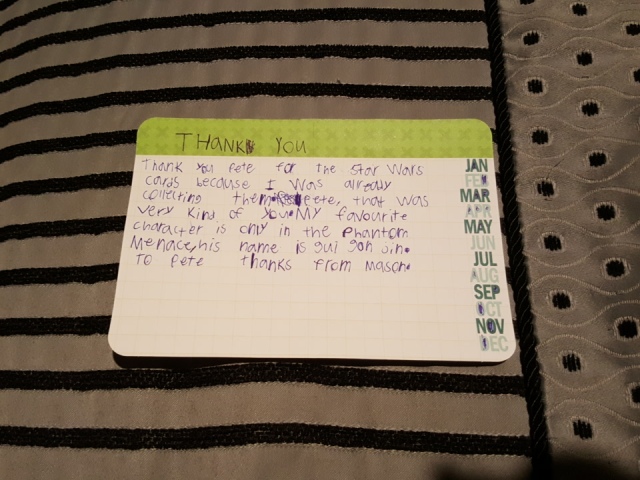 Mase is collecting the Countdown Star Wars cards right about now. He wrote Pete, our COO, this cute letter to say thanks! It’s one for his 21st wall.